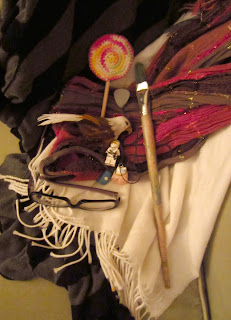 I started with a quick selection of personal objects and favourite things.
After arranging and shooting many ways, I sort of like this composition - I wouldn't mind drawing it.
I did lots of close ups and started to get ideas so I rearranged things - taking many more shots.
A vague story of some sort with the characters started to emerge so I played with them to give me as many shots as possible around something about these characters...
These are the shots I finally selected: 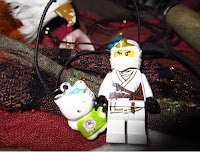 And this next one, which was taken with a different flash setting. I think it's important to stay consistent with all your settings unless you're really sure of the shots you want. In this case it kind of works out (and kind of doesn't) but is a sort of  washed out, or maybe vintage lighting...like a memory of a romantic dinner...although it seems a little too tense to be romantic...and Kitty seems stuck.

This last shot is a crop of my original composition. It could have been done in camera but wasn't, because I didn't know until later what my story was and I want this to fit visually in proportions to the other ones, and to focus my image on the objects I ended up working with.

But in the end, I think this is my final composition, with 3 images forming a narrative: I would like to zoom in more on the Lollipop Dinner to emphasize Dollar-Store Bald Eagle's and Ninjago's expressions.... But we're trying to work with the images we took...with little editing this time. The next project has us working on these more so I will remember that for then.

Does everyone want a page? 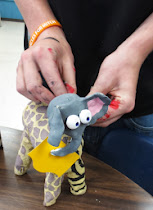 Pictures and text in this blog may not be used anywhere without express written permission. The work in this blog remains property of the artists participating. Please drop us a note for requests to use our images, text etc., either as a comment on any of our posts, by email request at: ScoreArt@freshorange.ca
or by giving props ~ indicating our site and including a link to our original material:
ScoreArt Blog at http://scoreart.blogspot.ca/